The Political Apologies Database has been updated! The latest version of the Database, dated August 2022, includes apologies that have been offered recently as well as older apologies that we recently found. We added 20 apologies, from countries including Slovakia, Bolivia, New Zealand, and Belgium.

We also added the English translations (by a translation company) of 23 apologies. These include apologies offered by political representatives in countries such as Mexico, the Netherlands, and Denmark.

A special thank you to our research assistant Mara van Lidth de Jeude who worked hard to find the new additions to our database using our data search methods (see our published article in the Journal of Peace Research here)! 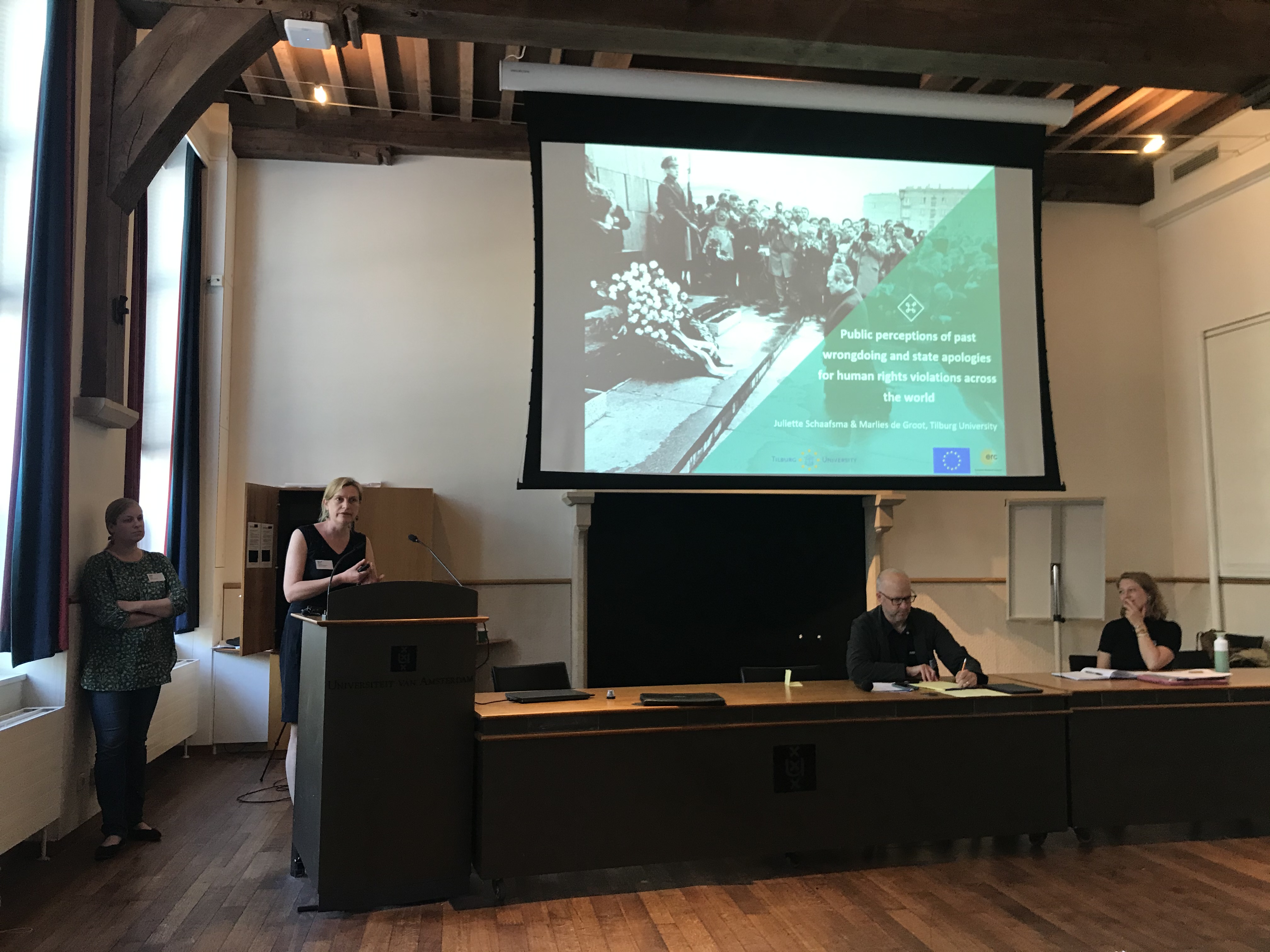 Last week, Juliette, Marlies, and Marieke presented at a conference hosted by the NIOD Institute for War, Holocaust and Genocidestudies and the University of Amsterdam on Historical Dialogues. Finally an in-person meeting again! Marieke presented on the interview study in El Salvador, the Republic of Korea, and the United Kingdom. Juliette & Marlies on the last large-scale survey that we conducted in 33 countries across the world. The panel, on Political Apologies and Redress, drew interesting comments and discussion. For more information on the Historical Dialogues Network, please visit: http://historicaldialogues.org/. 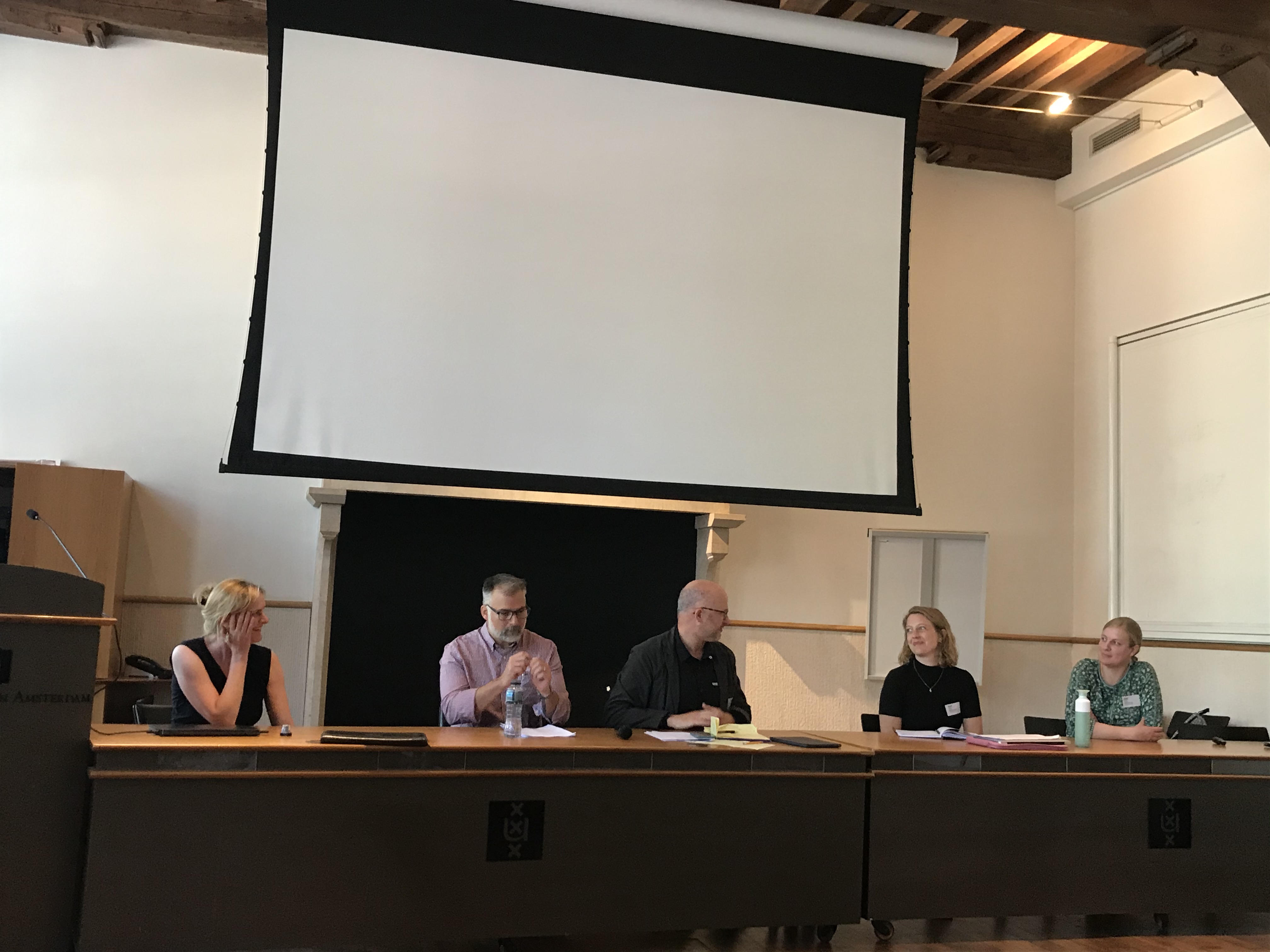 The podcast show called Me, You & Jeju, hosted by Darryl Coote and Alexis Joy, published a two episode series on the Jeju 4.3 Massacre – which is yearly commemorated on April 3rd on the island of Jeju in the Republic of Korea. Thia and Marieke were guests in episode 2, in which they talk about their research, the fieldwork on Jeju, and the apology by President Roh.

You can listen to the podcast via various media platforms listed on their website. Or you can watch the video via YouTube, the interview with Thia and Marieke starts after around 20 minutes.

Elsevier Weekblad published a story on our research project. The article is based on a long conversation between journalist Gertjan Schoonhoven, Juliette Schaafsma and Marieke Zoodsma. Both Juliette and Marieke give their comments on the current trends in the apology landscape and highlight some recent Dutch apologies.

The last seminar in our Online Seminar Series on Political Apologies across Cultures will take place Thursday 3 March from 14:15-16:00 CET. Register via this link and join us via Zoom this Thursday! 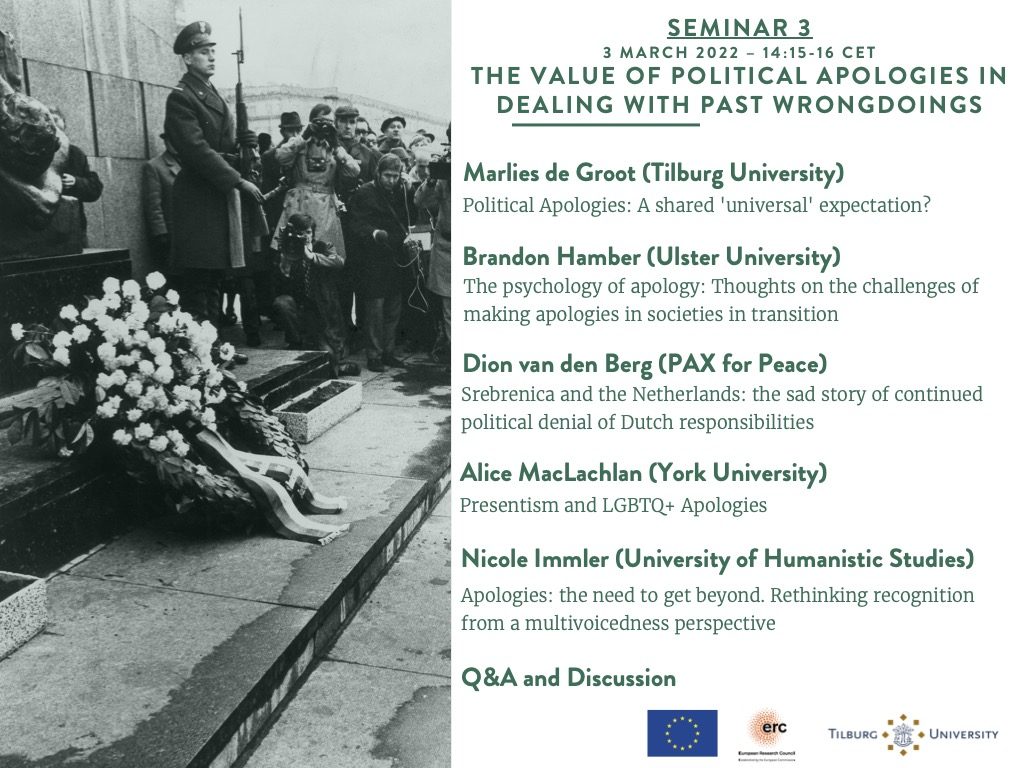 The PAC team yesterday hosted an online discussion & feedback session with people from the Jeju community, Republic of Korea. Our waim was to, while we are currently in the process of analyzing our interview and survey data and writing up the results, discuss some of our findings and ideas with those people involved in the Jeju 4.3 events.

Due to the pandemic, we could not visit in person, but with the generous help of the Memorial Committee of the Jeju April 3rd Uprising and Massacre and the Association for the Bereaved Families 4.3 Victims, we were able to give online presentations and have a lively discussion.
We felt humbled and inspired by all the comments and reactions we received. A special thanks to our collaborator Jimin Kim and our interpreter Debbie Kim.
The recording of the session is uploaded on YouTube.
Jeju Today published a report on the event. 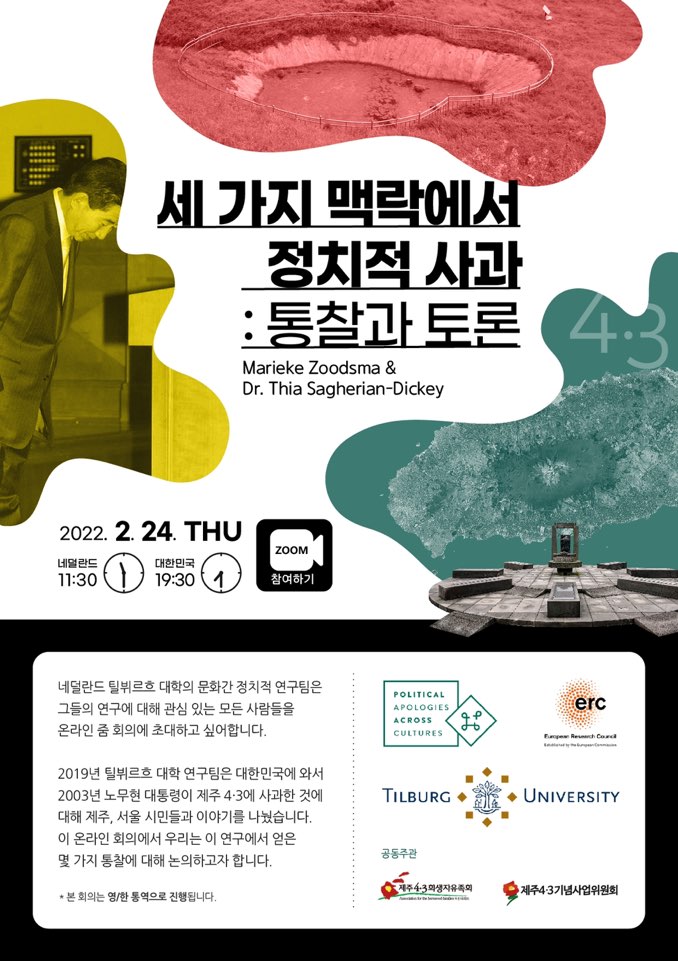 The episode includes Marieke’s comments on the apologies made by Dutch (political and royal) leaders to Indonesia, including the recent apology offered by the Dutch PM Mark Rutte.

Listen to the episode via Soundcloud or Spotify.

Our latest article titled “Group-based shame, guilt and regret across cultures” has just been published in the European Journal of Social Psychology. Together with our collaborators, Marlies and Juliette examined to what extent people (N=1,358) experience shame, guilt, and regret when their group (e.g., country, community, family) has done wrong, and compared this across eight diverse countries: Burkina Faso, Costa Rica, Indonesia, Japan, Jordan, the Netherlands, Poland, and the United States. We assessed whether any differences in these experiences can be explained by the extent to which people endorse more collectivistic or individualistic values, or live in a country where such values are more salient.

Overall, our findings suggest that people’s emotional responses to wrongdoing varies more than previous research indicates, and that group-based shame in particular may be more prevalent than previously assumed (see figure). The differences in people’s experiences of these emotions mostly depends on who has done the wrong. We also see some variation across countries, which can be partially explained by the endorsement of individualist and collectivistic values by people themselves and in their countries. The results highlight the importance of taking into account individual and cultural values when studying group-based emotions, as well as the different identity groups involved in the wrongdoing.

The paper, available as an open access article, can be found here:

The second seminar in our Online Seminar Series on Political Apologies across Cultures will take place Friday 4 February from 14:15-16:00 CET. Register via this link and join us via Zoom this Friday! 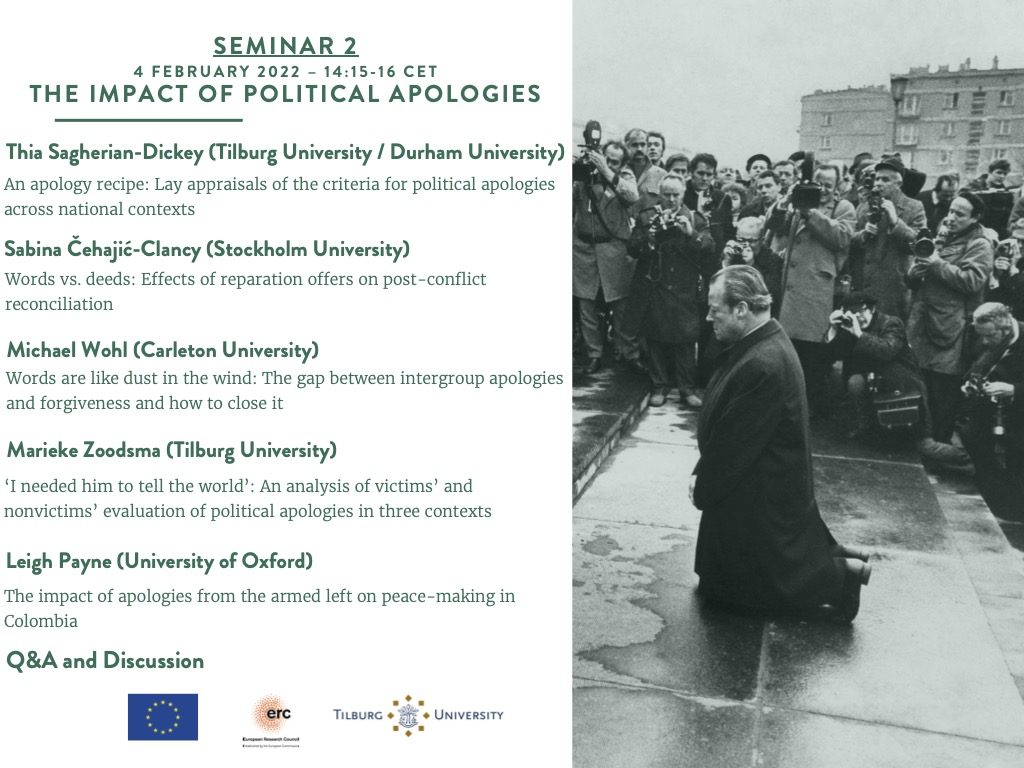 The first seminar in our Online Seminar Series on Political Apologies across Cultures will take place tomorrow from 14:15-16:00 CET. Register via this link and join us on Zoom tomorrow! 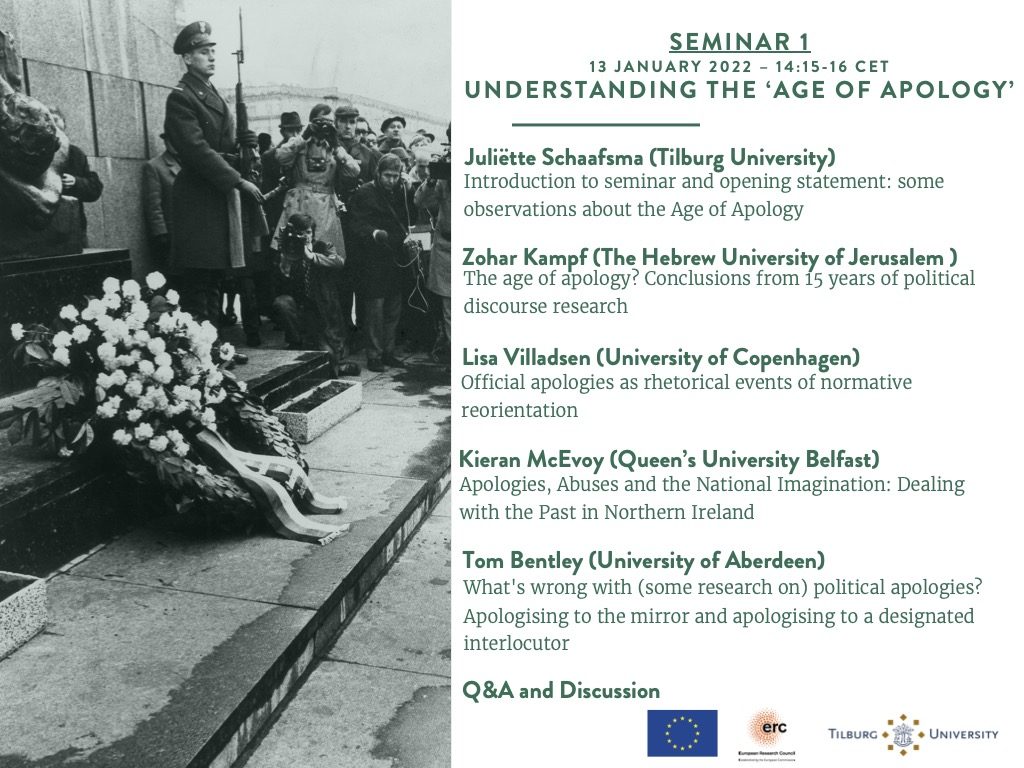